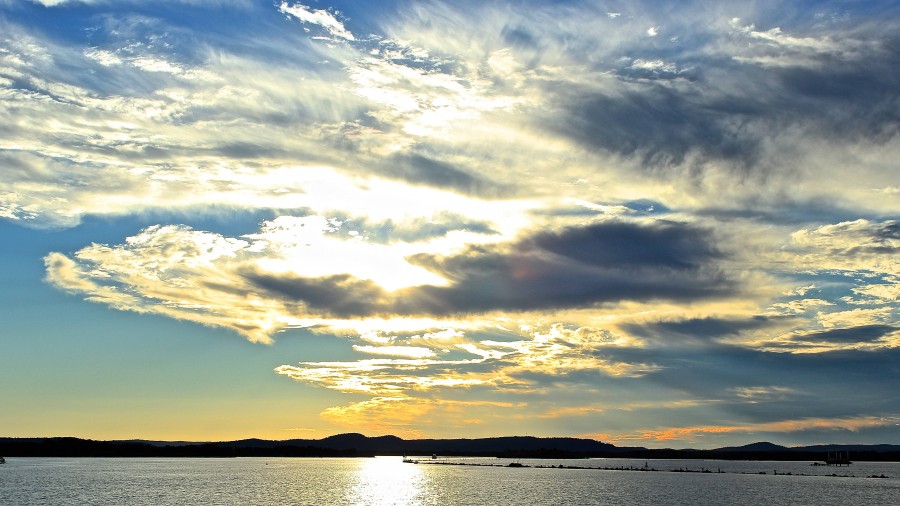 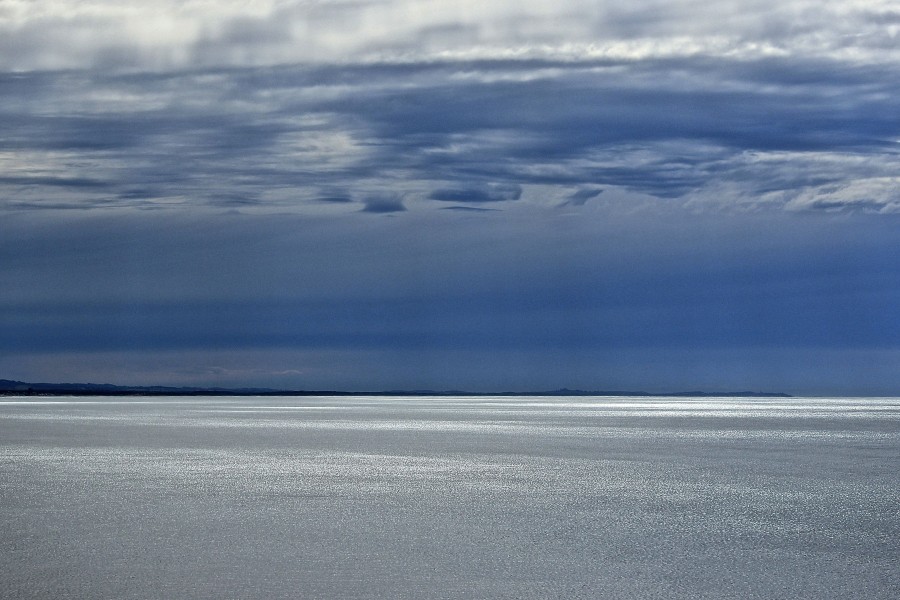 Three days ago in conversation with photographer friend Jai Long from Free the Bird Photography, we were discussing the pain and suffering caused in pursuit of the things we love. It reminded me of a few magical days we spent in the area around Yamba, south to Angourie and north to Iluka that I captured in the images below. The pain I speak of is both metaphorical and literal in this instance. The pain of looking upon such beauty and knowing that moments of beauty are so fleeting, yet evolving into other moments no more or less beautiful, but stunning in a different way. Also, the physical pain of staring at such beautiful sunrises and sunsets for so long, so determined to capture the beauty that your eye becomes strained, giving you a headache, blurring your vision for the entire of the next day and being unable to open your eyes properly or look to either side while having breakfast in the glaring morning sun.

The mouth of the Clarence River is home to Yamba on its southern side and Iluka on the northern. We had been to Yamba before, and had planned to stay a few days in the sun drenched town before continuing south. Driving into Yamba brought feelings of home, reminding me of my home town of Stillwater north of Auckland in many ways; the riverside location with the camping ground right on the water, the general sleepy holiday town vibe as though there is nothing to do but relax, and the rather aged population; the dead giveaways being that the Bowls Club was the largest building in town and a sign taped to a pole in the centre of a round about reading in spiky scrawl “prostate checks at the RSL, THIS Sat/Sun“. The quiet tree lined streets of Angourie differed from Stillwater only in that there is a cafe, a weekend/summer restaurant and a homewares and gift shop where Stillwater has only a boat club. We have yet to find anywhere so tranquil.

The break wall at the river mouth provides shelter to the huge natural harbour, home to a large number of prawn trawlers and fishing boats, the areas main industry. We thought we might try our hand at fishing ourselves, so picked up a rod and scented lures from the service station/fishing shop and headed to the break wall just on dusk. We tried three evenings in a row, to no avail. The one fish we caught on the first evening was marginally under size and had to be thrown back. I tried to appeal “but it would fit in our pan perfectly!”

“No, you always throw the first one back, I think it’s good luck or something”. He was obviously blatantly lying to my face, as we have not caught even one fish in the five months since.

The good things that come out of being cold, hungry and stubborn is that you get some beautiful sunset shots looking west over the harbour, and Ben got so close to a dolphin that he could’ve touched it if he weren’t focused on it not getting stuck in his fishing line as it cruised past. 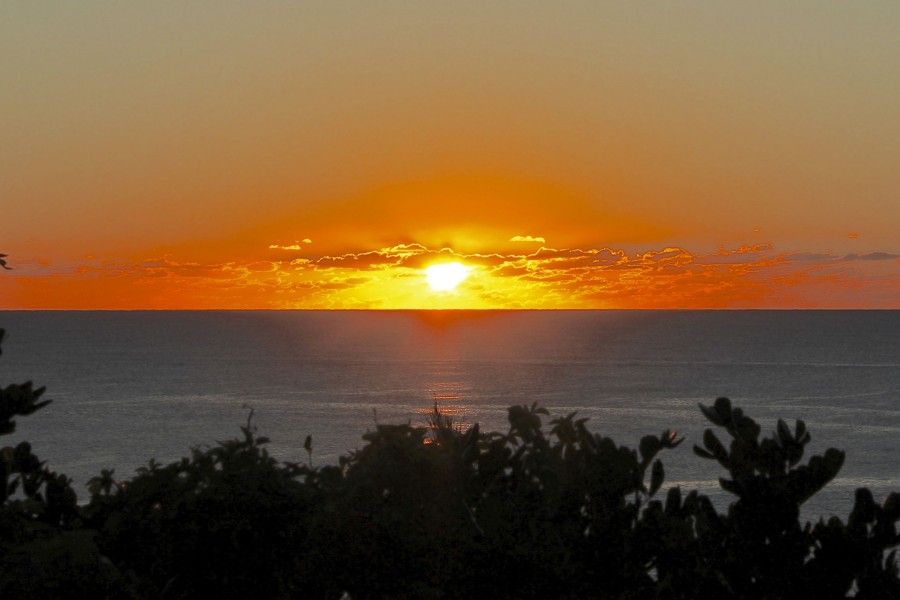 Sunrise over Angourie. You may remember this shot from such films as The Daily Grind.

After three days the swell died away at Angourie so we crossed the river to Iluka, catching some fantastic waves at the break wall and happening across our good friend from Byron, Angus McNicol, who we were sad to have missed just before we left. When the sun began to sink towards the horizon, I jumped on my bike and cycled down the road to the fishing co-op where I found mullet for $7kg. The local guys had caught 150 tonne of it the night before in the river mouth during the mullet run. They had fished all night and were only just pulling their boats out of the water when we arrived  in Iluka mid-morning. As I pulled up at the co-op, a man walked out with a brown paper bundle and sat at a picnic bench to reveal a huge helping of prawns and a pot of thousand island sauce. My entire childhood, this was what came into my head when I thought of Australia, sitting on the Newcastle waterfront with dad as we peeled prawns and fended off seagulls. I hadn’t been able to resist getting some prawns the day before, taking them to the blue pools (pictured below, hint: they’re actually slightly brown) for an afternoon feast. Not having an Australian father, Ben failed to join me in prawn filled ecstasy, finding the whole concept of dissecting small crustaceans, with the brown brain fluid spilling out over novice prawn-shelling fingers. A long debate ensued regarding whether or not prawn feasting was an Australian institution, so I cycled back from the co-op beaming with success over finding living proof only the very next day in the true-blue bloke tucking into white fleshed deliciousness.

This is what I remember when I look at the photos below. Sore eyes from beautiful sunsets and sunrises, sun warmed prawns and seeing our good friend to catch up over cheap wine and locally caught mullet while seated front row and centre for a dinner party in the van at Iluka break wall after an afternoon of scorching sun and good surf. 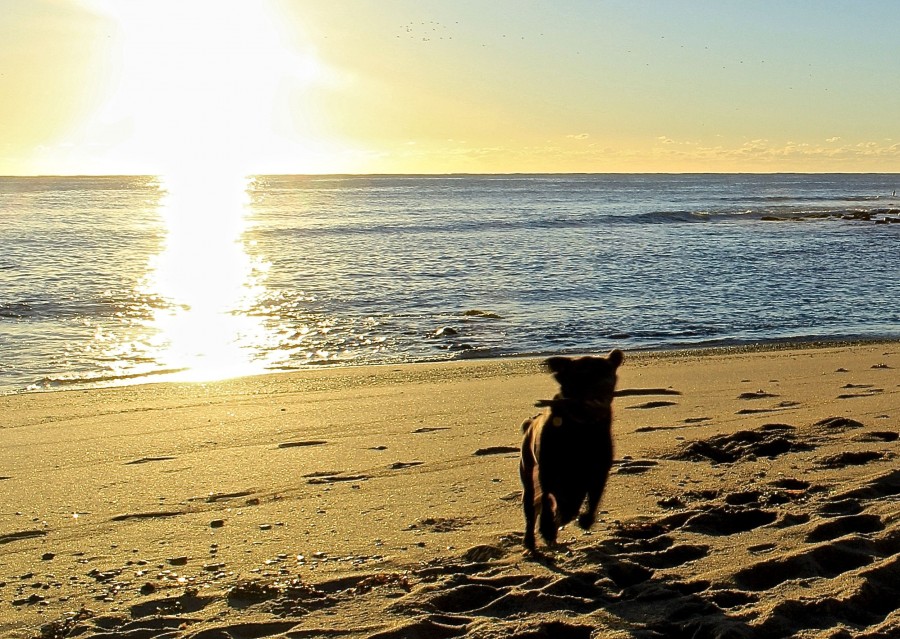 I love the sheer joy of a dog at the beach. Even his silhouette is excited. 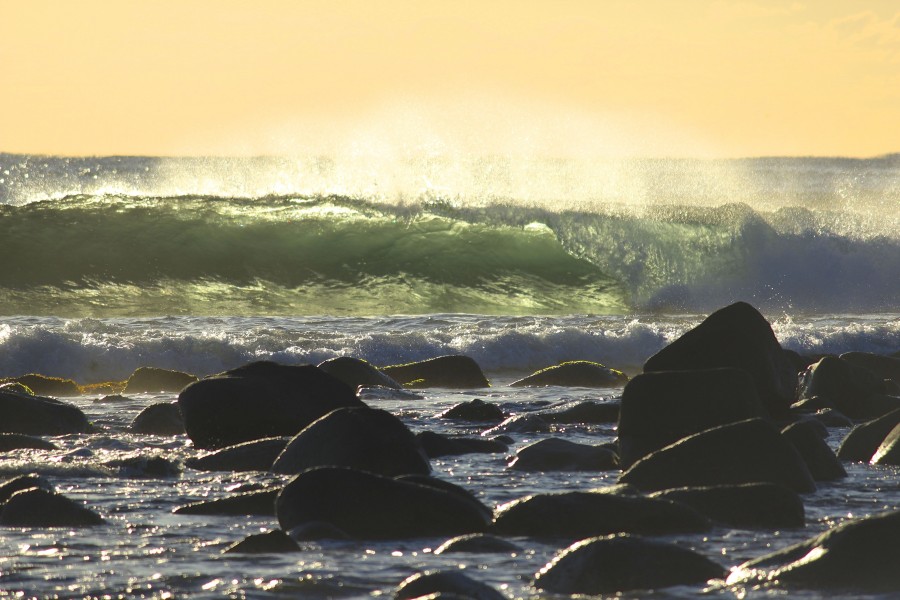 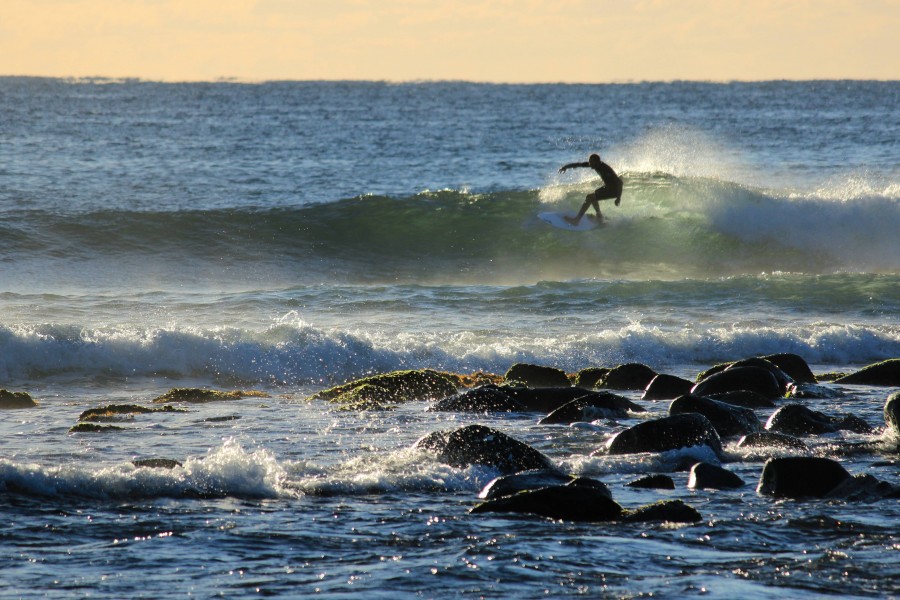 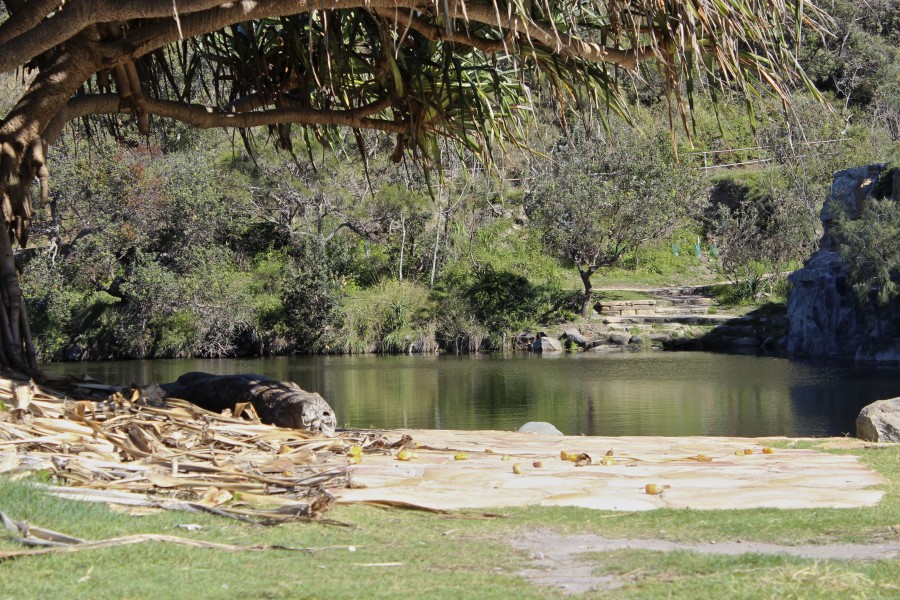 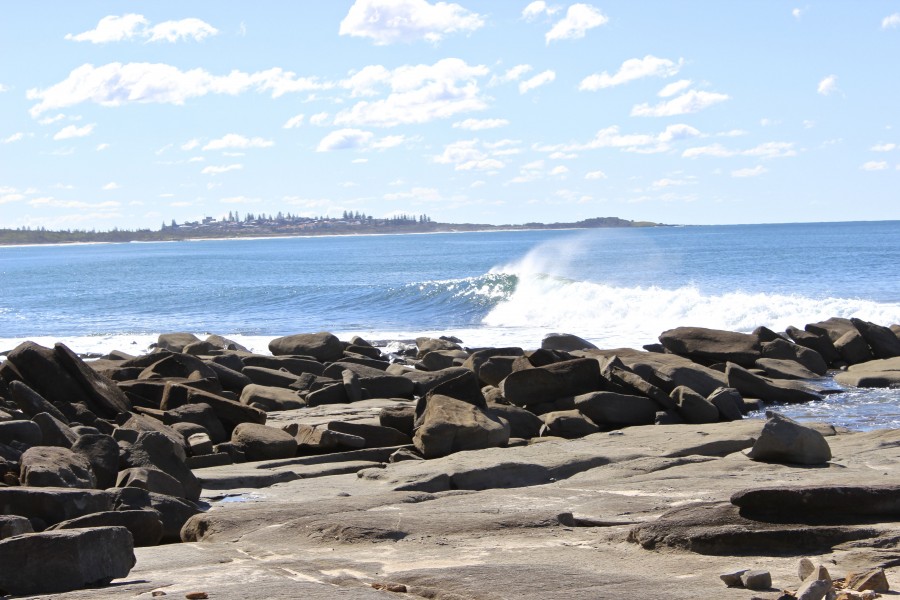 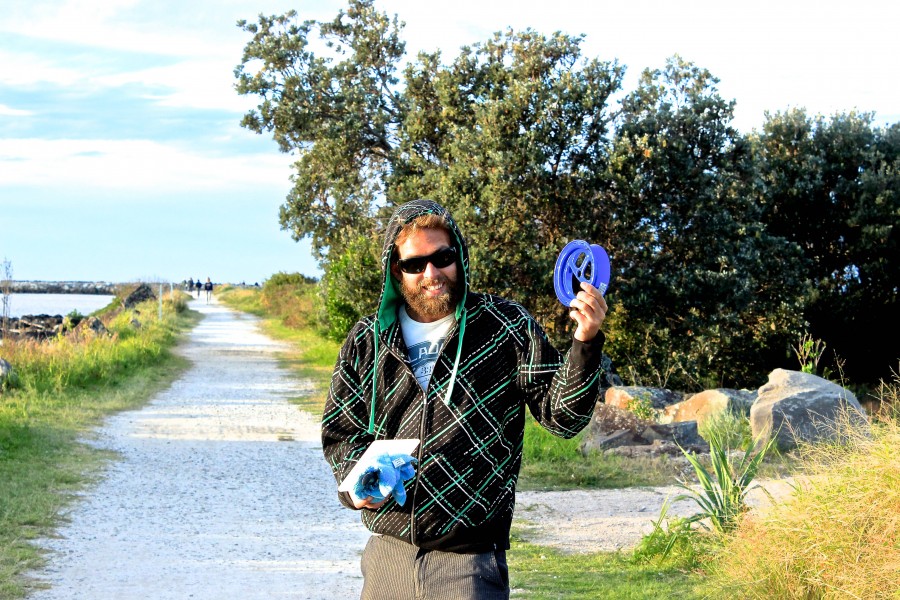 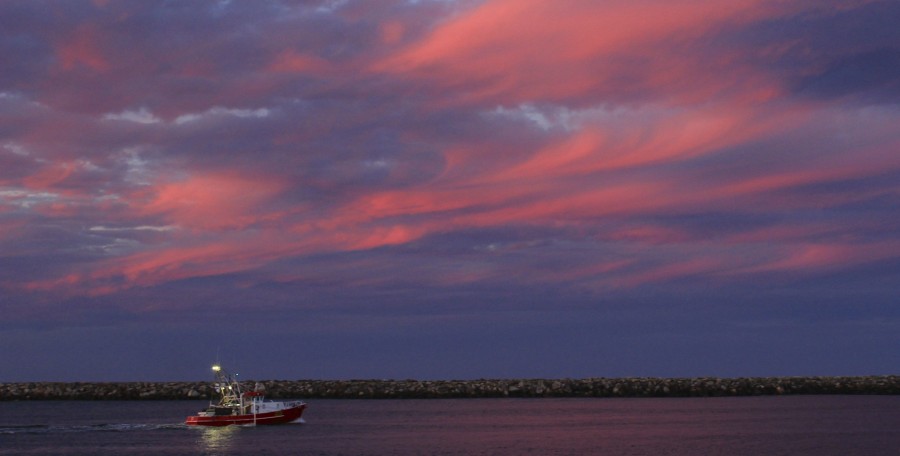 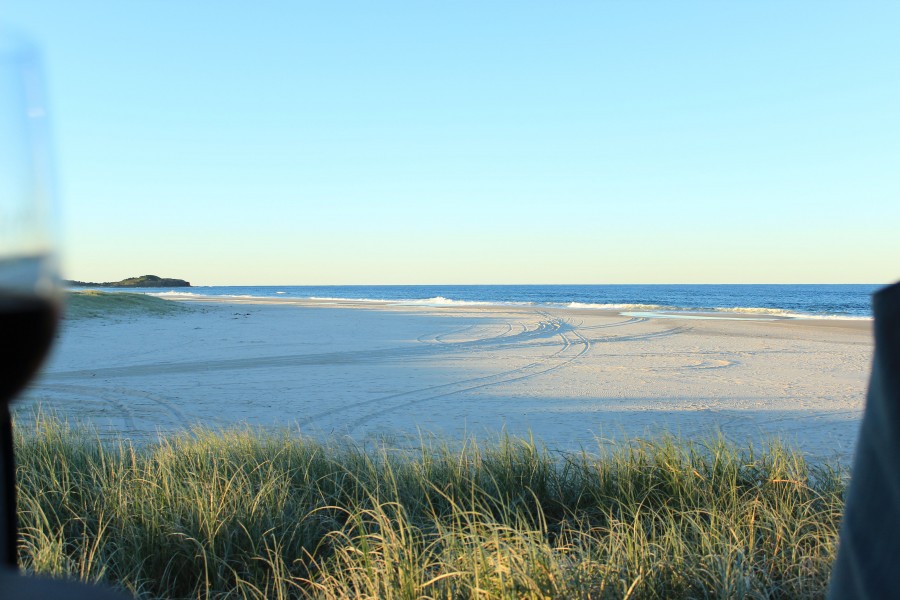 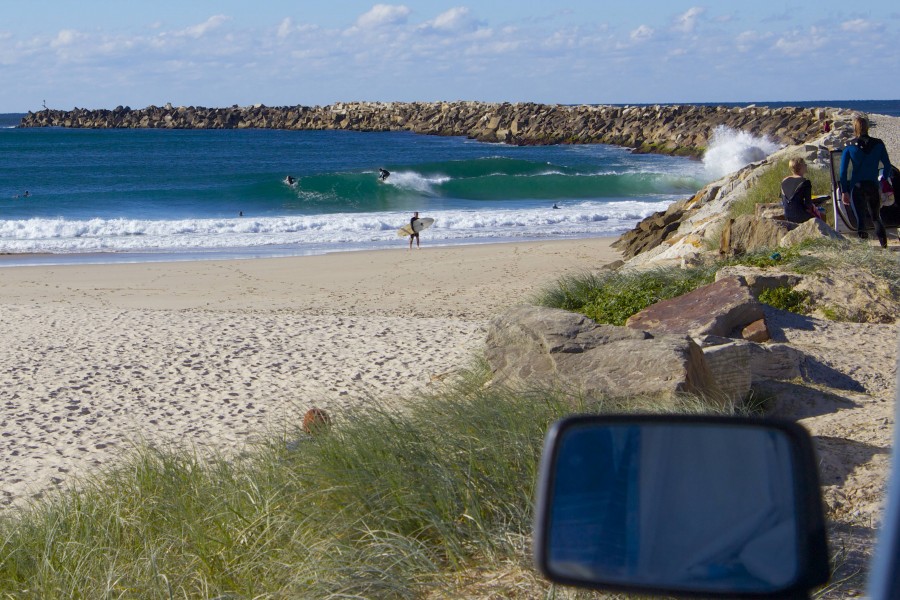 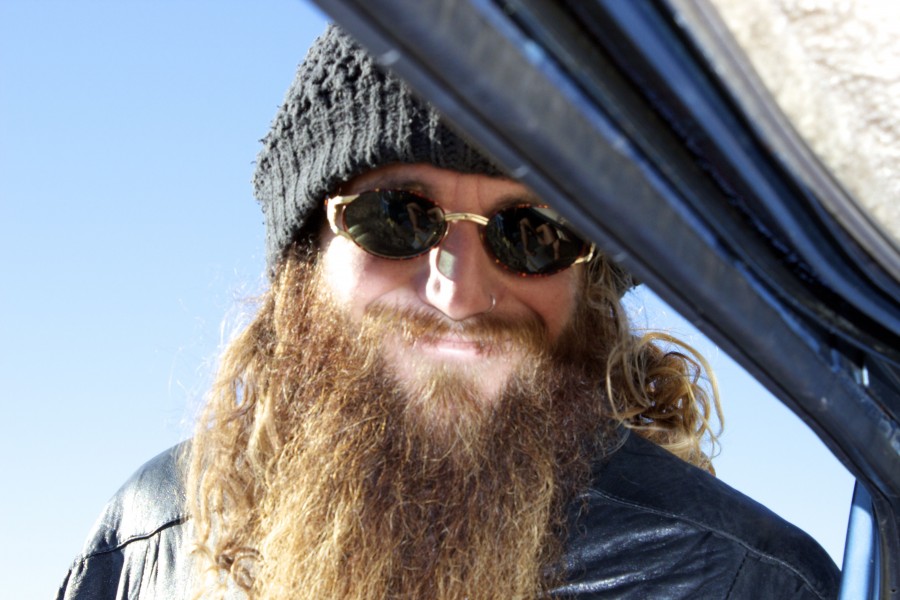